What Is a Menstrual Cup—How Do You Even Use One? 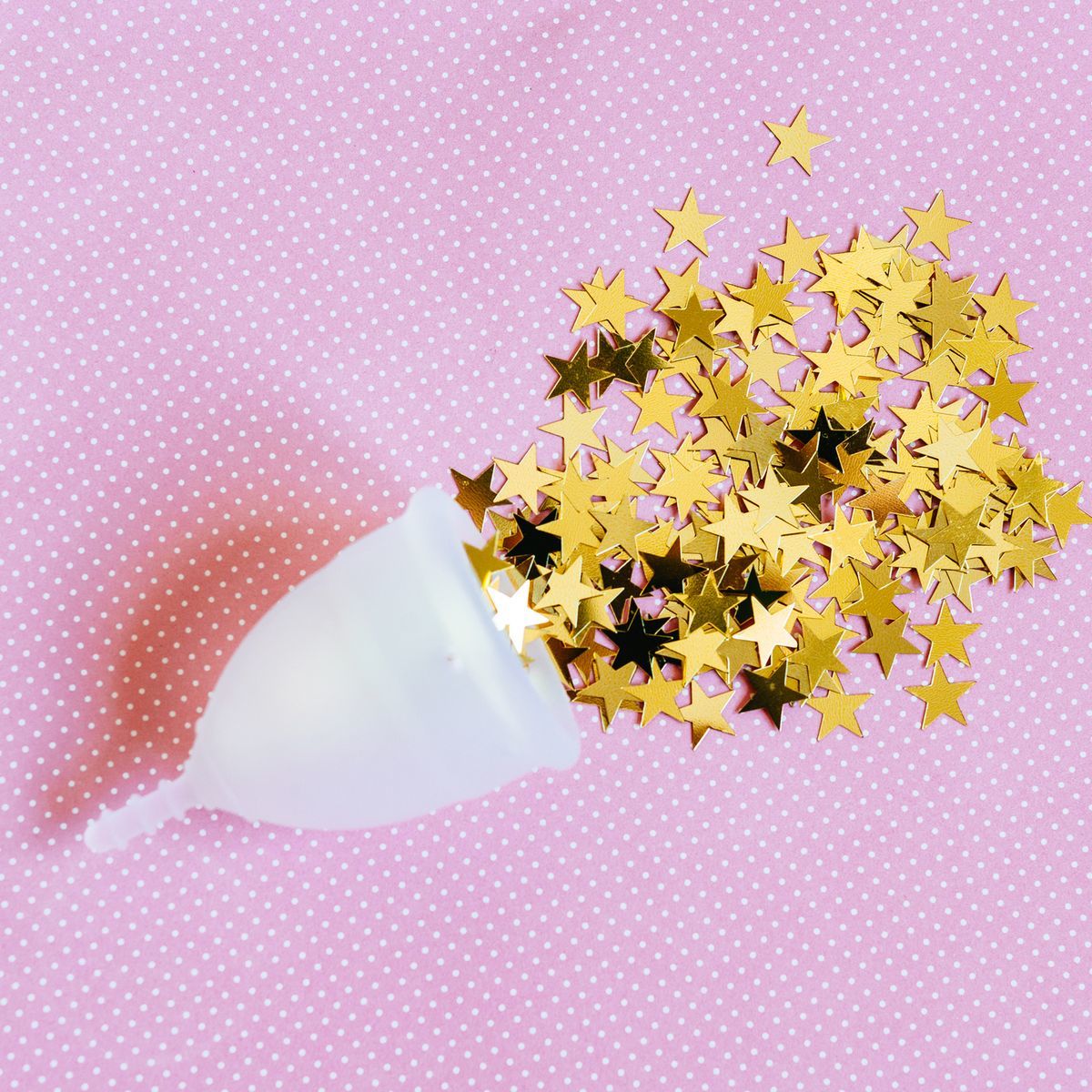 Menstrual cups can seem intimidating, but they’re a serious game-changer.

Buying tampons or pads doesn’t exactly inspire a lot of excitement. Making the monthly drugstore run to pick up whatever brand is on sale is more of a necessary annoyance than anything else.

But menstrual cups—which have been giving mainstream period products a run for their money—have gotten so buzzy, they actually sound kind of fun.

One small study found that a whopping 91% of tampon users who switched to a menstrual cup would recommend the method. Intrigued? Here’s what all the hype is about.

How does a menstrual cup work, exactly?

“A menstrual cup is effectively a fluid collection cup made of medical-grade silicone that you place inside of the vagina,” explains Leah Millheiser, MD, a clinical assistant professor of obstetrics and gynecology at Stanford University. Like a tampon, the cup sits inside the vagina like a roadblock between your period and your underwear. But rather than absorbing the blood like a tampon does, menstrual cups simply catch it.

Putting them in can seem a little intimidating—you have to get all up in there. “There is a learning curve, but once you get comfortable, it can be quick and easy,” says Adeeti Gupta, MD, a board-certified gynecologist and founder of Walk In GYN Care in New York. After cleaning the cup (and your hands) with soap and water, you essentially pinch and fold the sides to slide it into your vagina.

“The cup will open up on its own and cup the cervix,” says Dr. Gupta. To make sure it’s in place, “you can sweep your fingers around the cup gently while in the vagina to see if it opened up and if it’s covering the cervix,” she adds. Once the cup is full (which varies depending on how heavy your flow is), you simply pluck it out, empty the blood, rinse, wash, and repeat.

How to use a menstrual cup

Every brand has its own directions for use, so it’s a good idea to read the instructions before you try this at home. But, in general, this is how you insert a menstrual cup, according to Christine Greves, M.D., a board-certified ob/gyn at the Winnie Palmer Hospital for Women and Babies:

“If it’s in the proper location, you shouldn’t feel it,” Dr. Greves says. “The last thing anyone wants is to feel it all day.”

How to remove a menstrual cup

Removal can get a little messy, so it’s a good idea to do this over a toilet. Many menstrual cups have a small stem that hangs down. If yours is one of them, you’ll want to gently tug on this to get to the bottom of your cup, Dr. Greves says. Once you can feel the base, pinch it to break the seal, pull the cup out, and empty its contents into the toilet.

If your menstrual cup is stemless, just use your fingers to locate the base of the cup and break the seal.

Once the cup is out of you and emptied, wash it with mild soap and water (and then wash your hands). If needed, you can then reinsert the cup.

Anything you do with a tampon, you can do with a menstrual cup—even swimming or hitting up the gym, says Dr. Millheiser.

Menstrual cups also hold their own against pads and tampons when it comes to leak protection, especially if you’re used to plowing through tampons on heavy flow days. Since menstrual cups catch the blood straight from its source, they tend to be more effective, Dr. Gupta says, and depending on the size of the menstrual cup, it may hold more blood than a super-absorbent tampon.

But the main reason many women choose to use the menstrual cup over other options is for the rinse and repeat factor, says Dr. Gupta. The average menstrual cup will cost you anywhere between $30 and $50, but you can keep one for at least a year, or sometimes even longer depending on the brand. The reusability seriously reduces the impact on the environment—and saves you a lot of cash. Think about it: the average box of tampons costs you about $10 per month. Add that up over the course of the roughly 40 years you’ll spend menstruating and you’re looking at over $5,100 that’s literally flushed down the toilet. 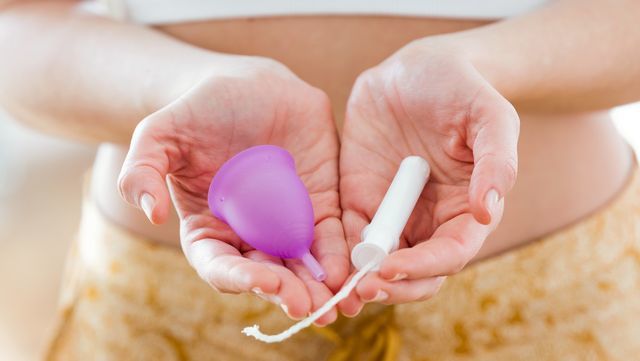 There aren’t many downsides to the menstrual cup, according to the experts. As long you’re washing your hands before you put it in and take it out, “there’s absolutely no increased risk of infection,” says Dr. Millheiser. When it comes to toxic shock syndrome (TSS)—a rare but deadly bacterial infection that has been linked to super-absorbent tampons—menstrual cups are safer, since the silicone cups simply hold blood, rather than absorbing it, she adds.

The biggest drawback? “They can be messy,” says Dr. Millheiser. “One of the challenges with the cup is that you don’t always have access to clean it properly; you can’t always guarantee you’ll be home or in a bathroom stall with a sink when you need to empty the menstrual cup,” she says.

And without a private sink, staying hygienic is tricky. “Women often find that they have to take it out and put it back in without washing it with soap and water first,” says Dr. Millheiser. In a pinch, carrying a bottle of water and wipes can help you clean the cup and any spillage on the go, but she doesn’t recommend relying on that.

Other risks are minor. Usually complaints are tied to having trouble putting it in or taking it out. “It all depends on a woman’s comfort level and lifestyle,” says Dr. Gupta.

Keep in mind, though, that a menstrual cup may not be for you if you have an IUD. Dr. Greves says she’s had several patients accidentally pull out their IUD when removing their menstrual cup.

How do I know when my menstrual cup is full?

Just like when you use a tampon, there’s a little guesswork involved with figuring out when your menstrual cup is full, says Jessica Shepherd, M.D., an ob/gyn in Dallas, Texas, and founder of Sanctum Med Wellness. “Every person will know their flow best and when to change their cups,” she says.

But, if you’re not sure, she recommends being on the lookout for things like a feeling of fullness, spotting when you wipe, or spots of blood that appear on your underwear.

How often to change your menstrual cup

At baseline, Dr. Greves recommends emptying your menstrual cup every three to four hours until you get the feel for your flow with a cup. “Have a pantyliner in case it overflows,” she adds.

But there’s technically no time limit on how long you can keep a menstrual cup in (unlike tampons). If you’re bleeding a lot, you’ll want to empty the cup every few hours to prevent any leakage, but on a super light flow day, you could theoretically leave the menstrual cup in for a full 24 hours.

That said, both Dr. Millheiser and Dr. Gupta recommend taking your menstrual cup out to wash and reinsert at least every 12 hours. “To have blood just sitting there pooling [longer than that], you’re probably going to have some odor and might have leaks,” says Dr. Millheiser.

If you’re getting stuck—literally—on the insertion, a water-based lube can help (like this one from Astroglide). “Just don’t use a silicone-based lube because that can actually break down the silicone of the cup,” she says.

Oh, and size matters. “Some companies make varying sizes according to the length and width of the vagina,” says Dr. Gupta—typically a small and a large. “Usually women who have not had a vaginal birth need the small size and women who have will need a large size,” she explains.

After each period, boil the cup in an open pot of water for about 5 to 10 minutes to disinfect it. “Let it dry on a paper towel and once it’s completely dry, put it away until you need it again,” says Dr. Millheiser.