How Often *Should* You Have Sex? 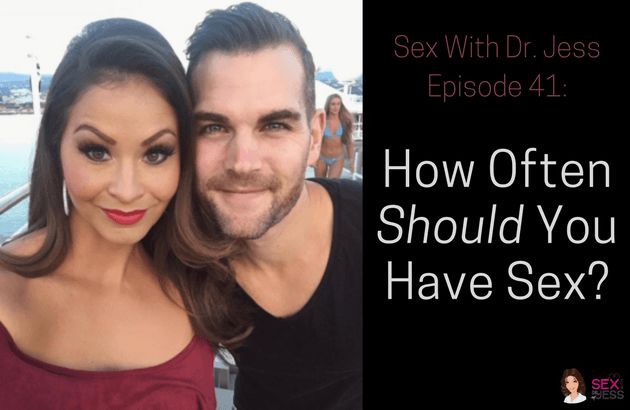 Jess and her partner, Brandon, chat about sexual frequency and discuss where they’re at in their relationship today. Jess also shares data on how often the “average” couple has sex and strategies for discussing frequency with your partner.

Now I took last week off while I was visiting family down in Florida. I was travelling with Brandon and my pup Lido and hanging with two of my favourite cousins — Mike and Denise.

Today, I’m down at Desire Resorts with my partner Brandon and while I’m here I’m teaching 2 workshops, hosting a few book signings and meeting couples from all around the world and, of course, having some very interesting conversations.

6 times per week after 36 years. I’m a sexologist and this came as a surprise to me.

Now they told me this while chatting with Brandon too and his reaction and my reaction was a little tense.

Cuz we’re sitting here fewer than 17 years into our relationship — and I’m supposed to be the sexologist and they’re having way more sex than I am — with Brandon or myself for that matter.

So I decided it’s time I talk about sexual frequency here on the podcast and maybe get a little personal since we all know Brandon has a much better radio voice than I do.

So babe, what did you think when you heard from this couple and was the tension between us that I felt real or did I imagine it?

Let’s be honest, how often do we have sex? And now we’re both about to stumble over our words or you folks are going to be faced with some awkward silence.

And do you want it more?

Do you feel like I want it more than you?

It has shifted over the years…and it’s affected by my travel schedule.

Here’s what the data says. And I’ll preface the data with a few thoughts.

First, I’m always reluctant to talk about frequency and averages because you’re not average. And you’re not an average. I’m always worried that averages will be used as barometers or yardsticks against which to measure your relationship’s success. But here’s the thing: frequency only matters as much as YOU feel it matters. You don’t need to have more sex unless you and/or your partner want to have more sex.

So if I share the data and you weigh in at a higher number, it doesn’t necessarily mean your sex life is satisfying. Because you may have sex more often than other couples, but it still may not be as much as you or your partner want it. Similarly, you may have far less frequent sex than average and have a richly fulfilling sex life, because the only true measure of your sex life’s degree of satisfaction is your own.

SO that’s the first thing I want to say before I share the data. The second is: people lie about sex even when surveys are anonymous because ultimately we lie to ourselves.

I’ve spoken to couples and one partner will report that they have sex weekly and the other will say they have it consistently every other day. Unless they’re having it with separate partners, which is a different story altogether, something has got to give. Someone is not telling the truth. And perhaps neither are – and perhaps it’s not intentional, but it’s inaccurate nonetheless, so please interpret sexual frequency data with a degree of skepticism.

But here is what some of the research says:

That’s a lot of data…another way to put it, is that for Americans in relationships, the most commonly reported frequency is somewhere between 3-4 times per month. Just under half of married men and women between the ages of 25 and 49 have sex a few times per month to weekly. This was the highest rate in this age category.

Another really important piece of research looks not at frequency alone, but the connection between sexual frequency and happiness levels. University of Toronto researchers found that there is a magic number on average and that more sex is positively correlated with greater happiness, BUT this associated happiness maxes out at once per week. Muise explains that weekly sex seems to be enough to maintain the connection and the happiness boost is really about prioritizing intimacy and sex — not about keeping score.

And though experts caution that quality is more important than quantity, addressing sexual frequency is essential, as desire discrepancies can lead to tension, strife and resentment if left unaddressed.

To overcome the universal experience of desire disparities, you need to talk openly about how often you want to have sex. This conversation is of paramount importance, because most of us cannot accurately gauge how often our partner desires sex. If you want sex more often than your partner, you’re more likely to underestimate their interest and they’re likely to do the opposite and overestimate yours.

To address this disconnect, I suggest you undertake a simple exercise with your partner every six months: record how often you want sex on a piece of paper (e.g. once per week, once per month, once per hour). Be honest. Underneath your number, write down how often you believe your partner wants to have sex. Have your partner do the same and then compare notes. Have a laugh. Have a discussion. And then address strategies to meet somewhere in the middle.

As you search for common ground (this is key to creating sexual compatibility), you’ll want to ask and answer a number of questions:

Regardless of whether you want sex more or less often than your partner, you’ll need to share in making attitudinal and behavioural adjustments to find some common ground. Cultivating compatibility is a team effort and. You are, of course, not required to meet your partner’s sexual needs, but if you’re in a monogamous relationship, you likely want to find a mutually satisfying balance to increase your odds of a happy, lasting relationship.