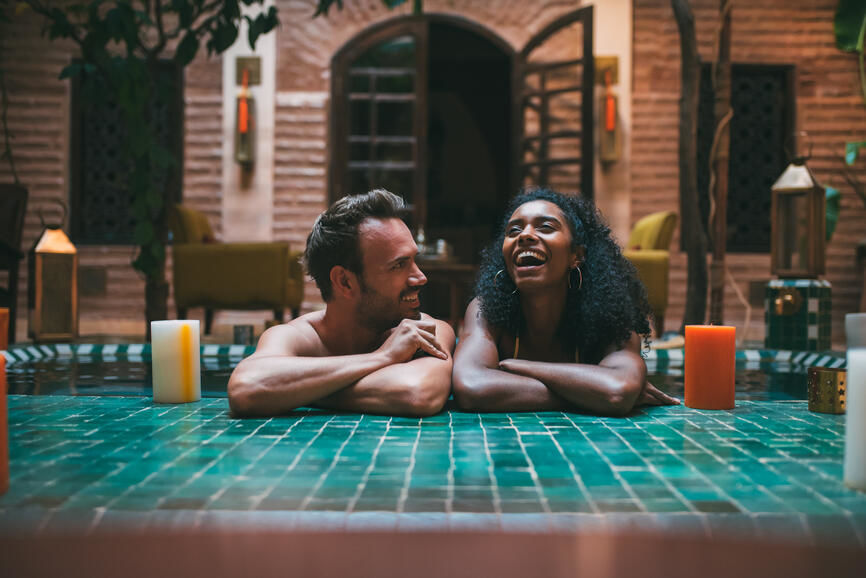 Posted By Erica Sloan
02/11/2021
Are you looking to take your sex life to new depths or perhaps even flood it with a different kind of sensation? You might put water sex on your horizon. But while adding wetness to the sex equation may seem like an inherently good thing, both for that kind of wetness and cooling off amid the summer heat, being fully submerged in water can work against your natural lubrication and introduce several other complications worth noting.

Anyone familiar with the woes of shower sex will know that regular old water does not create the same slippery, slick finish as lube—and, in fact, it can have the opposite effect of drying out the vagina and vulva. “When the water of a pool or hot tub washes away your natural lubrication, that can lead to increased friction with the potential for small skin abrasions or micro-tears,” says board-certified OB/GYN Amy Roskin, MD, JD, chief medical officer at The Pill Club, a birth-control provider. And should that happen, any exposure of those tears to chlorinated or salty water can cause stinging or irritation, she adds.

"When the water of a pool or hot tub washes away your natural lubrication, that can lead to increased friction with the potential for small skin abrasions or micro-tears." —Amy Roskin, MD

Not to mention, there's the potential for infection from any microbes lurking in the water. This is a bigger issue with lakes and the ocean—which are not recommended as locales for sex, simply given the risk for a public-decency charge—but may still be a concern in pools and hot tubs, too. While they’re typically protected from microbes via chlorine, if the pH of the pool is allowed to creep up past 7.2, their disinfectant properties drop in efficacy, and there’s a higher chance of infection, according to this 2016 CDC report. (And saltwater pools aren’t immune to that possibility either, adds Dr. Roskin, as the chloride properties of the salt work similarly.)

In a private pool or hot tub that’s well-maintained, though, you’re less likely to get into such, well, hot water. Even so, you do still want to take all possible safe-sex measures: You can still get pregnant or contract an STI as a result of water sex (because no, the chlorine, salt, heat of the water, or anything else will not kill sperm or any of the microbes associated with sexually transmitted infections). “In fact, if there’s more abrasion with water sex, that may even make you more susceptible to getting an STI,” says Dr. Roskin. To that end, if you usually use condoms, be sure to use one for water sex, too (more on that below).

All of that said, water sex can still be a steamy pathway to orgasm, or even just a fun way to add some waves to a sex life that’s been feeling sort of flat. The change of scenery, in and of itself, can add new dimension to any sexual experience, and the buoyancy of the water puts a whole new slate of positions on the table (floating sex, anyone?). Another notable perk: Water sex eliminates the need for post-sex cleanup.

Below, get Dr. Roskin's top tips for having water sex that doesn't skimp on the safety.

Here’s how to have safe and satisfying water sex:

1. If you typically use condoms, keep doing that

As noted above, there’s still a risk of pregnancy and STI transmission with water sex, though Dr. Roskin says there’s limited data comparing in-water with out-of-water sex as far as likelihood of conception goes. To be safe, use a condom if you plan on having penetrative sex with a penis-having partner with whom you’d normally use a condom.

Go with latex, specifically, to ensure it holds up well in the water, says Dr. Roskin, who also recommends a secondary form of birth control, given the increased chance of a condom breaking with the extra friction of water sex.

Okay, fine—having a bottle of lube poolside might seem a little extra. But if it’s nearby and accessible, it’s worth grabbing before things get going. That way, you can get ahead of the aforementioned dryness bound to creep up with underwater thrusting.

It's also worth noting that not all lubes are created equally when it comes to water sex. You’ll want to grab the Astroglide  silicone-based personal lubricant kind since it’ll last longer in a watery situation than any water-based lube would, says Dr. Roskin.

3. Find your footing (or secure whatever position you choose)

There are some physical limitations to any kind of water sex because water makes slipping and falling that much more likely. Shallow areas can help you lock in your footing, as can holding onto railings or the side of the pool. Keep an eye out for walls, however, and underwater stairs and seats to avoid knocking into anything hard in the heat of the moment.

If you’re worried about the cleanliness of the water you’re in or the mechanics of actually having sex while afloat, you don’t have to throw in the towel on water sex completely. Consider underwater foreplay or non-penetrative sex acts instead by taking advantage of your playful environment (and the fact that you’re both already wearing minimal clothing) to caress your partner beneath the water’s surface. Or, just make out in the pool, and when things start to get steamy, let all those sexy feelings ripple right back into your bedroom.